First and foremost, I tried to overcome my embarrassment at visiting a nursery school to ask for advice by going not as a “graduated child’s mom” but rather as “a mom-designer.” 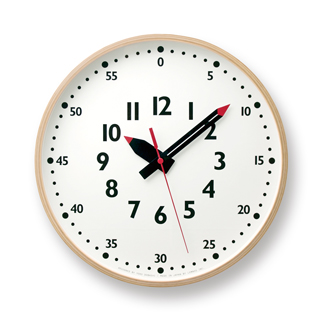 The opportunity to design “a clock which is developed by a mom-designer” with famous clock company Lemnos arose from a short talk with company president Takata. Although I didn’t yet know what direction to take, I promised him I would visit a Montessori nursery school to seek advice. However, there was a big hurdle in my mind.

What is a mother’s standpoint? 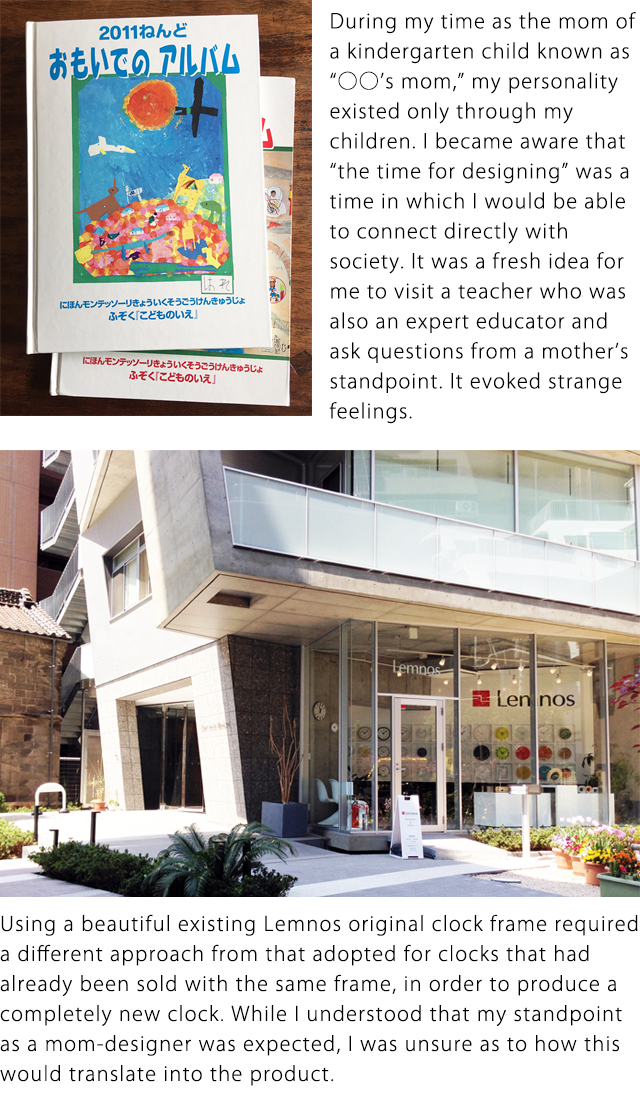 In a Lemnos meeting room filled with numerous design clocks, I selected a clock frame during a casual chat that had a massive, white, 248-millimeter-diameter resin frame. I figured that the massive, white frame would act as a physical border between the clock and the other materials on the wall. Also, I intuitively liked the balance between the thickness of the frame and the circle as the ratio between them was reminiscent of mid-century design. Thinking back on it now, I actually chose it from a perspective that bore no relation to a mother’s standpoint.

On the other hand, president Takata recommended a plywood frame produced by a tambourine craftsman. “In a nursery school, natural material could come to fit, couldn’t it? Even more, it comes in different sizes. If you would like to produce an original clock from its frame, feel free to ask me,” he said. As a result, after reconsidering, we opted to design a clock using a plywood frame, as per his recommendation. 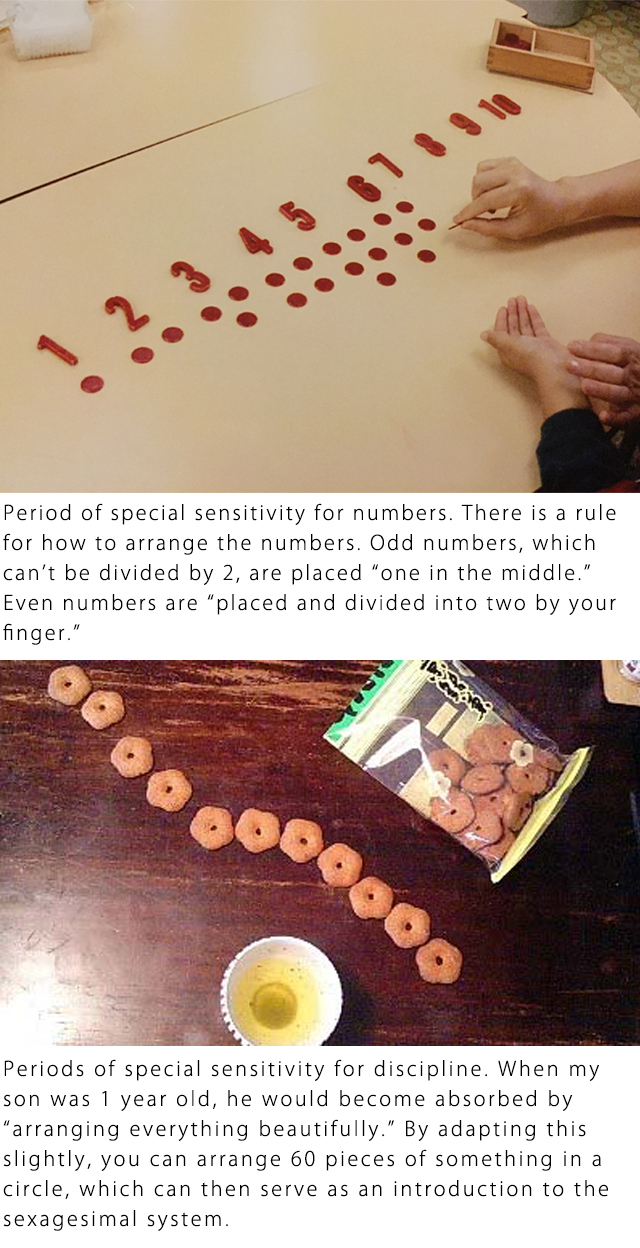 Looking back on that time, however, I think I had a stubborn side. I felt the necessity of “a clock having a clear reason for it being used with kids” even while deciding on its size. Also, I had no idea about making the original clock frame that president Takata had suggested. There could have been time and development cost, which may have led to a high price for the clock. However, regardless of that, spending too much time on the decision for the clock frame would have meant less time to think about the detailed contents of “an analog clock featuring numbers in the sexagesimal system.” It was like putting the cart before the horse. It was more important for me to produce a clock in time for the child whose mother I had made cry to go through the period of special sensitivity for numbers, and then to apologize to her if she were to rejoin the workshop. Furthermore, families with children who will join my workshop would be able to share smiley time more frequently.

“Period of special sensitivity” is a technical term used in Montessori education. During a specific period, we can observe the way in which children are strongly attached to going along the same street and doing the same thing repeatedly. 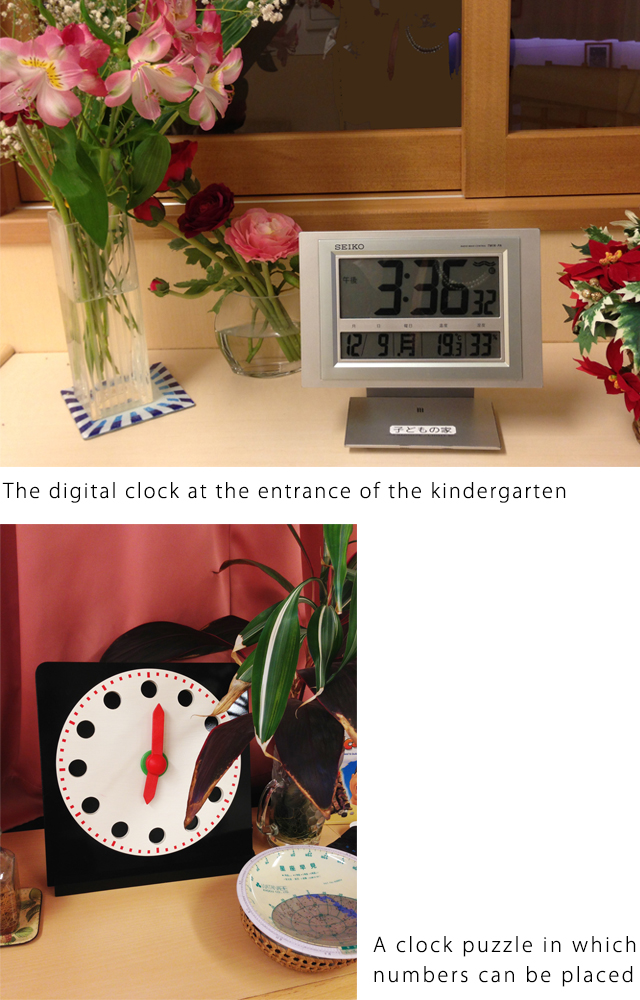 I then took a large carton containing samples of clock frames from Lemnos to my children’s kindergarten. I asked Ms. Misa Sakurai, my children’s kindergarten teacher and a senior researcher of the Japan Montessori Research Institute, about the type of clock that would be suitable for children, in order to seek opinions from a professional educator.
“There’re various materials in the world. Wood and plastic have their beauty respectively. In that sense, both materials are needed and we have various kinds of clocks, analog, digital, big and small, in our kindergarten. The important thing is that the time on the clocks is the same even though each one has a different appearance.” 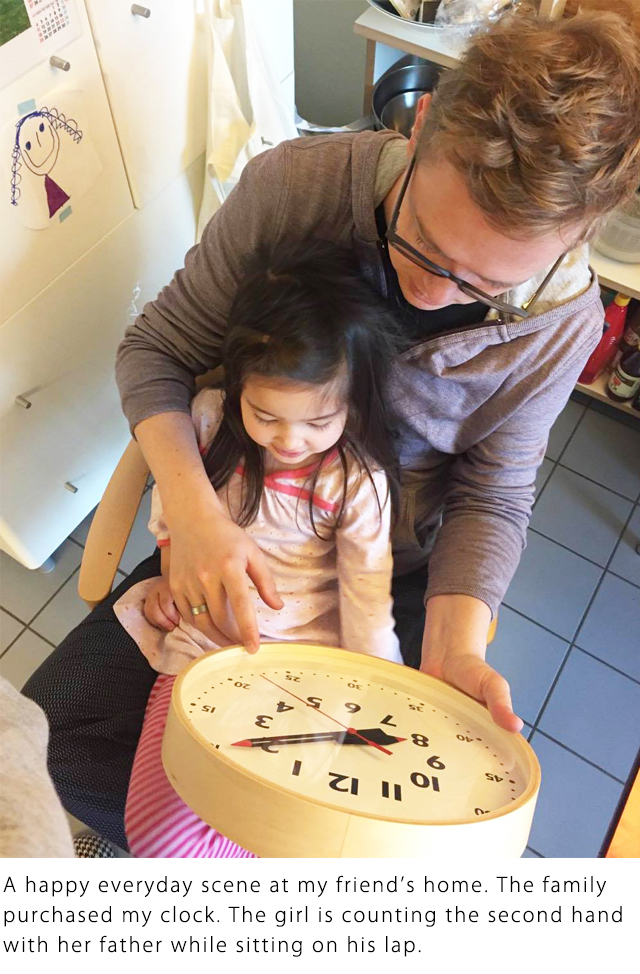 As a first clock for children, I consider analog to be better as they are able to follow the constantly moving time with their eyes. Clock hands move little by little and young children are able to recognize that time is actually passing by the movement of the second hand. Our aim is to cultivate a better understanding of time and hour among children by relating them to a clock. For example, we count 60 and check that the minute hand has moved by 1 minute. In the silent time before lunch, I say, “keep your eyes closed and count 1 minute. When you feel that 1 minute has passed, prepare for your lunch.”

Those words reminded me of a precious thing. I always image happy scenes whenever I start designing something. 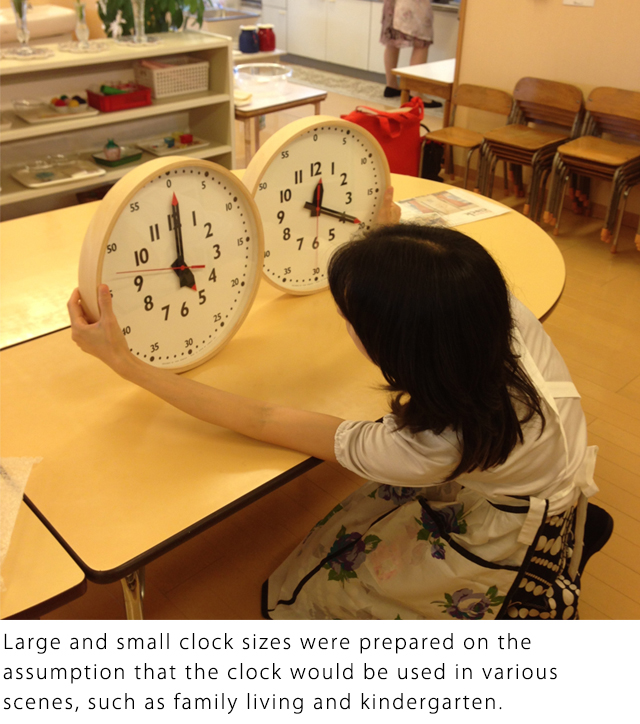 A wall clock is usually placed on the wall, some distance away from children. When situated some “distance” from the children, a clock needs to be a certain size in order to be able to point to its second hand and count to 60. Ms. Sakurai and I both thought this and so we chose the same clock frame. It was actually the same as the one that president Takata had chosen.

With the clock frame now chosen, I promised her I would make a plan from my sketch, ask for a sample to be produced, and take it to the kindergarten. I went home in triumph.