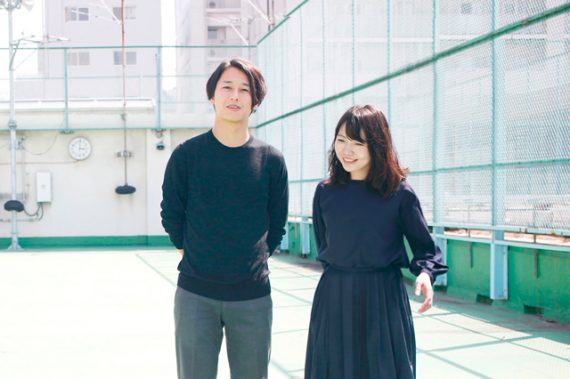 [text: Mitsuyoshi Kikuchi]
Mr. Kikuchi from Studio Surume shared his thoughts on the journey from the clock’s birth to its launch.

How the Perch clock was born 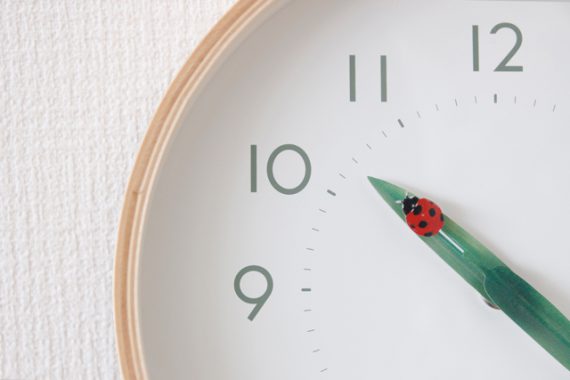 Once an hour, when the minute and hour hands cross, an insect rests its wings on a leaf. If you happen to glance at the clock and see the insect resting on a leaf, something good might happen. A wonderful story was created by having the clock hands resemble leaves with an insect.

A small doodle in a corner of a sketchbook 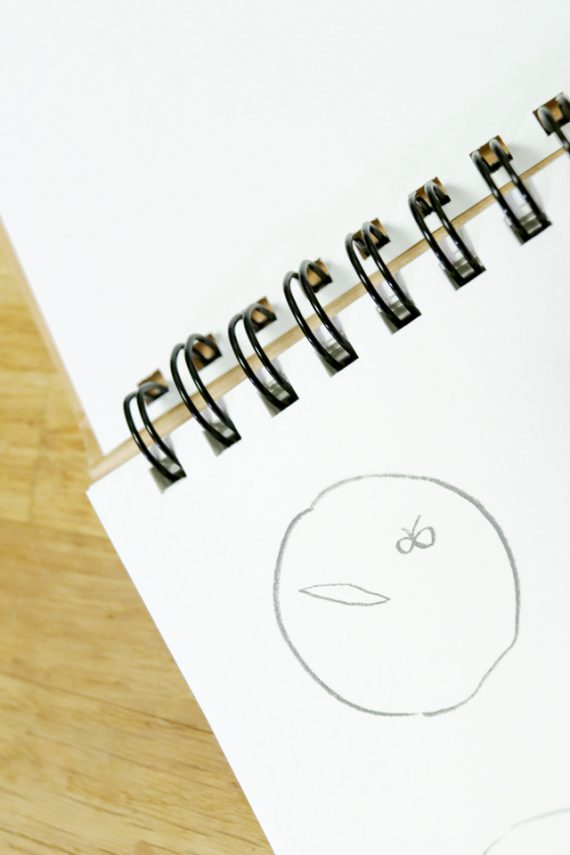 In 2012, upon our graduation, my wife, who was then my art school classmate, and I started our own studio, Studio Surume. We set up our office in a small apartment while working part-time. We first had to be recognized by the public, so we decided to apply for and exhibit at various exhibitions. We had no money at all but were so happy to be able to work as designers that we just had fun every day.

Prototype as an art piece

We spent many days racking our brains about how to give shape to the small doodle. How do we develop a sketch of a butterfly perched on a leaf into a product? We came up with the idea of creating a mysterious appearance, as if the butterfly were really floating in the air.

After much trial and error, we finally settled on a structure that uses magnets to move the butterfly. We immediately experimented by making a prototype using a clock movement and some styrene board and acrylic that we had in our office. After several days of experimentation, we finally succeeded in making the butterfly move.

Once the experiment had been successful, the rest was quick. We bought all the necessary materials at a home improvement center and completed the samples for the exhibition purely by hand. I wasn’t aware of this at the time, but the clock movement uses coils, so the magnets would have some effect on it. It was my first prototype, which I now think of as an art piece.

Exhibiting and meeting at Interior Lifestyle 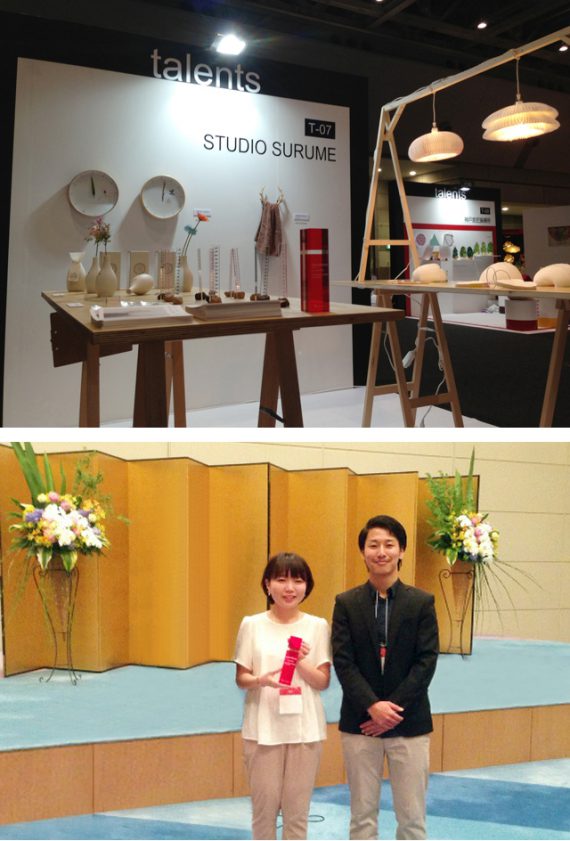 The completed prototype was exhibited at Interior Lifestyle in June 2013. I think I felt strangely nervous because of the various designers exhibiting in the surrounding booths. Of those exhibiting in the same area as us, only one group would be selected and invited to Ambiente, an international consumer goods trade fair to be held in Germany at a later date, free of charge. We were standing at the booth, feeling excited that we might be selected.

It was just after noon on the first day of the exhibition, and we had such a sense of excitement. A kindly-looking plump man wandered over to the booth. He listened to my explanation with a smile on his face and slowly opened his mouth when I had finished talking. “When I saw this work, I felt some kind of energy and decided to talk to you.” “Has this been commercialized with anyone else?” “Why did you decide to make it?” At the end of a long conversation, he gave me his business card and said, “If you intend to commercialize this product, you should come to our company.” It was Mr. Hiroshi Takata, president of TAKATA Lemnos.

Maybe President Takata felt some energy from our prototype or brought us good fortune, but on the final day of the exhibition, we were selected as the designers to be invited to Germany.

A visit to TAKATA Lemnos headquarters in Takaoka

After the exhibition, I was in doubt but tried emailing President Takata to report on our winning of the award, and he immediately suggested that we visit his factory and have a chat. To our surprise, he offered to pay for our transportation and accommodation. As inexperienced designers, it was a dream come true. It was our first business trip. Nervous but excited, my wife and I headed to Takaoka with a prototype of the clock. There was no direct bullet train at that time, so we took the Hakutaka train. The view of the sea from the window was really beautiful. In Takaoka, President Takata, wearing sunglasses, was waiting for us. He took me on a tour of the TAKATA Lemnos factory, and we had a meeting at the head office to discuss the clock. This was also the first time I met Ms. Takewaki, with whom I still communicate in product development. It was a nice company, where everyone was smiling and calm.

The conference room at the headquarters was filled with wall clocks. I felt a little nervous when I thought that each of those items was filled with the designer’s thoughts and feelings. I am always nervous, as you may have gathered. At the start of the meeting, President Takata said that it would be difficult to commercialize the magnetic structure we were making, but that they would do their best to express the image. “Why don’t we take on the challenge together?” he suggested.

At the time, I was half disappointed because I wanted to stick with the design where the butterfly looked like it was floating, but also half happy that President Takata saw some potential in the design. I was really unsure as to whether we could come up with a good structure, but I was reassured by the atmosphere of working as a team to create something good together. This was the first step in the lengthy product development of the Perch clock.

The evening where I learned important things 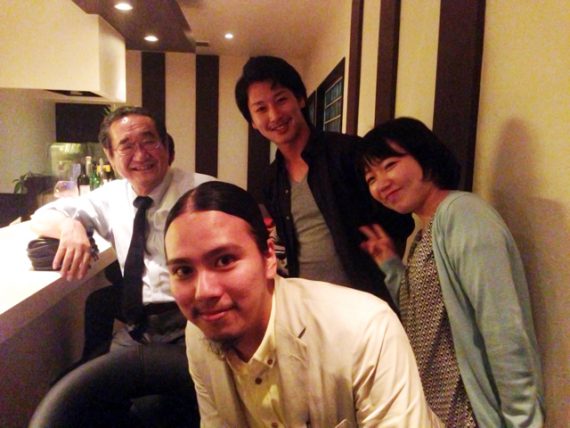 Since I was staying in Takaoka that night, I had dinner with President Takata. We talked about design, manufacturing, and many other things. There were many things I did not understand at the time that are now becoming clearer and clearer. Even now, when I think back on him, he was a truly warming person. He gave me some energy and taught me important things. I owe him my life.

There are a few things that President Takata taught me that I still follow to this day. One of them is writing with a fountain pen. I still feel that it was a simple but very important piece of advice. Every time I hold a pen in my hand, my back straightens and I am reminded to live carefully. Incidentally, President Takata was a Montblanc person, while I am a Pelikan person. 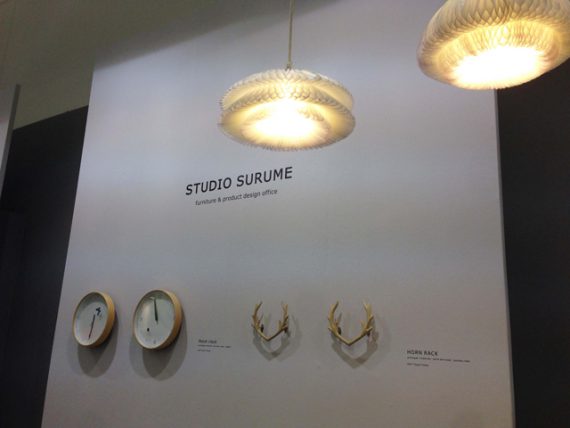 Then the days of product development began. How do we express the image? How do we make the structure where the butterfly is perched without using magnets? What do we do with the clock face?

The year after we started product development with Lemnos, we exhibited at Ambiente, Germany, and received so many opinions from people of various nationalities and races.We hit a brick wall so many times as we tried to figure out how to put together the image of the Perch clock.

I visited Takaoka regularly to work with the Lemnos staff through trial and error, slowly tackling one obstacle at a time, and five years had passed since I was first approached.
We overcame the obstacles one by one with the help of Mr. Kikuchi, Ms. Takewaki, and everyone at TAKATA Lemnos.
A vague concept was explored in depth, targets were clarified, and the art piece became a product.

The structure was tested many times, starting with the magnet. We eventually settled on placing the butterfly on a balancer as advised by Lemnos.
(The balancer is the part responsible for the smooth movement of the clock.)
We tested various possibilities for the butterfly, including prototyping using a 3D printer, semi-3D printing with resin, and bending aluminum sheets.
The image of the clock face also evolved from the first idea with only simple indicators to the final version with numbers in a warm typeface.

For a manufacturer, five years is a long time to wait for a product to be created, but Lemnos worked with us all the way up to finding out what was best for the product. I feel like I learned a lot about their approach and attitude to manufacturing from the product development process. 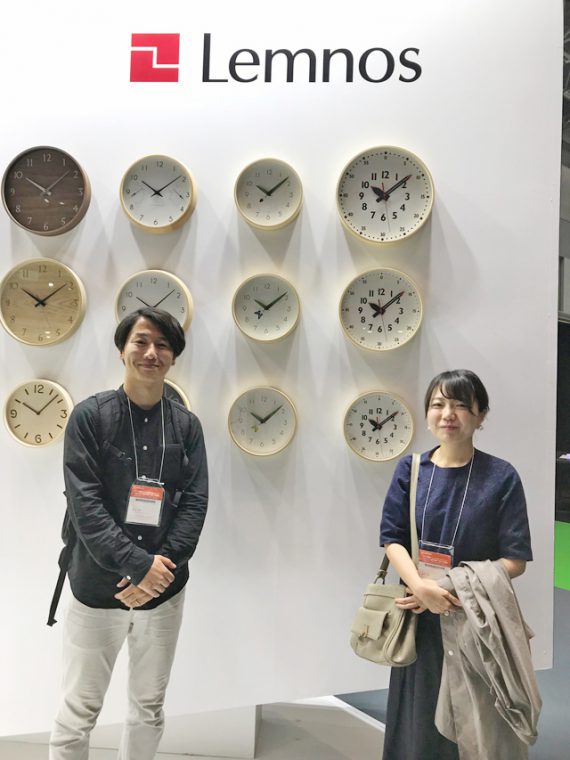 We may have worked too hard on it, but thanks to that, I can proudly say that I am truly satisfied with the design. The first exhibition of the finished product was held at Interior Lifestyle, the same place where I met President Takata. When I saw the clock on display at the Lemnos booth at the exhibition, I felt a great surge of excitement. When the clock was presented, I felt like I had really become a fully-fledged designer. I learned a huge amount during the days spent on product development.

Since the product launch

It makes us happy every time we hear the clocks have been selling well since the product was launched. Maybe it’s just me, but sometimes I search the internet and read reviews. There are different comments; some are kind and some are harsher. I read the comments carefully, aware that all of them relate to designs I have worked on. There were times during the process when I felt like giving up, but I am really glad that we worked hard and made it to the commercialization stage. I would be very happy if the Perch clock spread its wings to many different families in the future. It would be a great honor for me as a designer if, during the busy morning hours, parents and children would look up at the clock together, or lovers would cuddle up together, and from there create many memories and stories.

As an aside, after the commercialization, my wife and I spent three months traveling around the world.
Ever since I had the opportunity to meet designers from around the world at an exhibition in Germany, I have always wanted to see more of the world. My wife and I went abroad because we felt we had grown a little from fledgling designers and had commercialized the Perch clock; we felt like we had reached a turning point in our lives. It’s a long story, so I won’t bore you with it, but while abroad, I interacted with and listened to people from many different countries and drew an immeasurable amount of inspiration from them. (By the way, I have seen Lemnos’s products in several countries.)

I’m currently in the process of putting together a design based on my experiences and inspirations and proposing it to Lemnos. What kind of products can we design in the future? We want to bring more wonderful designs to the world. There is much to be excited about.