The Good Design Award is hosted by the Japan Institute for Design Promotion, a public interest incorporated foundation. It’s precursor, the Good Design Selection System (or G Mark System), was founded in 1957 by the Ministry of International Trade and Industry (the current Ministry of Economy, Trade and Industry), and has been engaged in this work for about 60 years. 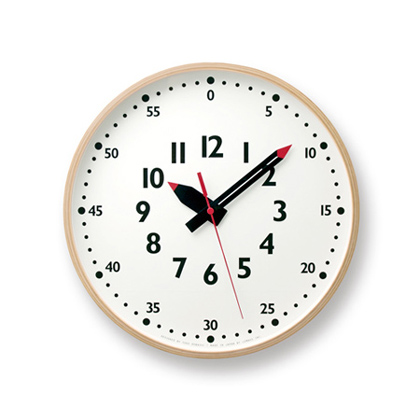 < fun pun clock
An analog clock that motivates children who cannot read a clock desire to learn how to do so.
The origin of the clock’s name, with a touch of humor, came from the Japanese pronunciation of reading time. In Japanese, youread 5 minutes as “go(five)-fun”, 10 minutes “ju(ten)-pun”, 15 minutes “jugo(fifteen)-fun” and 20 minutes “niju(twenty)-pun”. This clock is easy to explain to children, simple, made of beautiful materials, and matches any interior design.

GOOD DESIGN AWARD
This award is sponsored by the Japan Institute of Design Promotion and is awarded once a year for items featuring excellent design. The award has its origins in the “Good Design Selection System” (known as the “G-Mark System”) instituted by the Ministry of International Trade and Industry of Japan in 1957. Its current name was adopted in 1988 following a privatization. It is the only comprehensive design evaluation and commendation system in Japan. A wide range of genres, from industrial products to business models, event activities, and so on, are eligible for the award.
“G-mark” has played a role as an index of “good design” for more than half a century since its establishment.